Sling promised the app would go live tomorrow but pulled the trigger early and launched it today instead (though I guess it is tomorrow in some time zones).

Things are looking good - so far all 3 reviews are 5 stars, though this may change when we get more installations. Here are the snaps from the Android Market as of a few minutes ago: 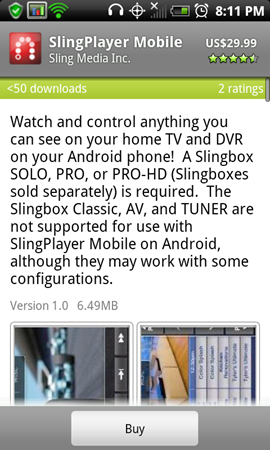 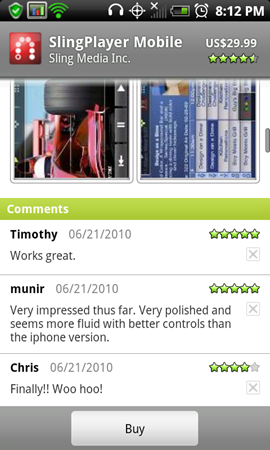 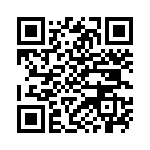 Foster City, Calif., – June 22, 2010 – Sling Media, Inc., a wholly owned subsidiary of EchoStar Corporation (NASDAQ: SATS), announced today the availability of its SlingPlayer Mobile™ application for Android™ Smartphones. The all new application gives Android phone users easy access to their home TV experience anywhere they have mobile phone or Wi-Fi internet access. Now anyone with an Android phone never has to miss a favorite TV show when they're away from home.

"We're committed to the Android platform, and users of our new and improved SlingPlayer Mobile application will experience one of the most complete mobile television experiences available today," said Sling Media Senior Vice President and General Manager John Gilmore. "Now the full spectrum of viewing, including local channels and sports teams, video on demand, pay per view and even control of their home DVR, is available to the growing number of people moving to Android."

When in your mobile phone provider's area of 3G, 4G or Wi-Fi coverage and connected to a Slingbox® SOLO, PRO or PRO-HD, SlingPlayer Mobile makes it simple to watch and control your living room television at any time from any location. Watch live and recorded TV and schedule recordings of new programs from any Android Smartphone.

SlingPlayer Mobile for Android features faster startup and control response times, and it works among a variety of Android-based mobile phones in the market today. It also has a new user interface that gives quick-touch access to the most critical remote controls and recently viewed channels.

*Price is in U.S. dollars. U.S. dollar to local currency exchange will be carried out at purchase via the customer's bank or credit card provider. Pricing and availability subject to local laws.

Have you tried it out? Is it as good as it sounds? Share in the comments.