Barnes & Noble has announced a new, Wi-Fi only, version of the Nook today, offering a lower introductory price point next to the more expensive 3G model.

Available to buy from today, the new Wi-Fi model is available for just $149, over $100 cheaper than the original price of the 3G model. For that price, you’re still getting what’s essentially the same Nook as before, just without the 3G internet connection. In an attempt to rub salt into Amazon’s wounds, Barnes & Noble has also reduced the price of the 3G model to just $199. 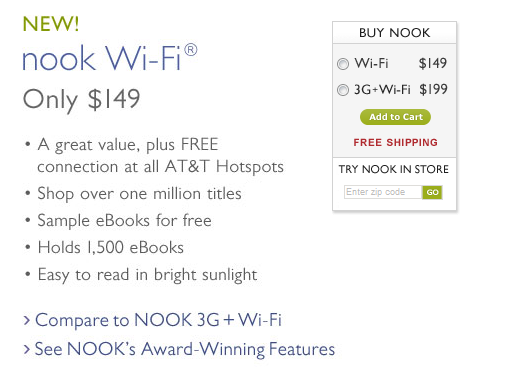 Barnes & Noble's new price for NOOK 3G marks the market's first under-$200 dedicated full-featured eBook reader that offers both free 3G wireless and Wi-Fi connectivity. And Barnes & Noble continues to enhance the eReading experience for all NOOK 3G and NOOK Wi-Fi owners through its latest 1.4 software update, now offering even more places to connect to Wi-Fi for free and faster access to the content they want to read.

Not to be outdone by a competitor, Amazon undercut B&N’s new pricing just hours later. Sure enough, you can now pick up the 6” Kindle from Amazon’s site for just $189.

With a price war beginning in a market still in its infancy, it’s certainly good news for consumers. Hopefully, e-book prices will also become more attractive in the future, although with the development of the Kindle and Nook being driven by the profit made by content on the store, that may be slightly naïve on my part. Whether this move will drive demand in the future is yet to be seen, but a sub-$200 price point is bound to get more people interested.

[Giveaway] Vlingo Voice Control App Reviewed + We’ve Got 25 Licenses To Give Away!