One of Gizmodo's readers Zack unexpectedly stumbled upon an upcoming Motorola Droid 2 at a tech show and didn't hesitate to snap some pictures and play around with this Droid successor.

Here are the main points of his review, in my favorite bullet point style, to save you some time: 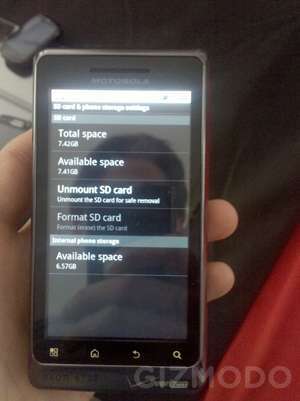 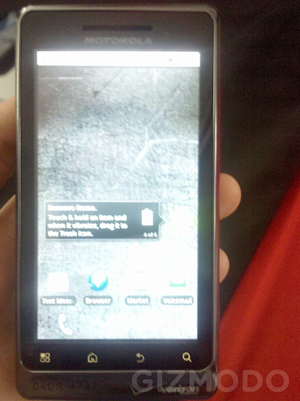 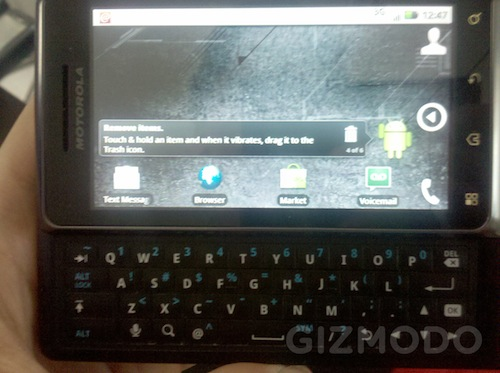 And here's Zack's full account if you want the original:

I am a summer intern at the Jet Propulsion Laboratory (NASA) this summer and today there was a tech show on the lab. There were a lot of cool new technologies along with booths for companies like Microsoft, Apple, Sprint, and Verizon.

I went over to the Verizon booth and was surprised to see a curious-looking phone next to regulars like Blackberries and the Droid Incredible. I picked up the phone and once I looked at it more closely I realized it was the Droid 2. I asked the representatives and they told me that they weren't sure exactly what the name was going to be, but that it was indeed the successor to the original Motorola Droid.

It felt really nice in my hand. It seems smoother than the original Droid. A lot more curves and less sharp edges. Held next to my original Droid, it seems exactly the same size The headphone jack, volume buttons, power/sleep button, and the Micro-USB port were all in the same place and pretty much exactly like the original. The camera button is also in the same place, but smaller and the same color as the volume buttons.

The camera on the back was a 5.0 megapixel, so I don't know why it isn't any better than the original Droid's. The camera was definitely faster though. It took a picture very quickly compared to the original. The whole device was a dark crome-like color instead of the original Droid's black. The soft keys were touch-sensitive at the bottom and were in a different order than on the original phone. It still had the Motorola and Verizon logos, as well as the "with Google."

Opening it up, the keyboard is definitely wider and has blue coloring instead of the gold from the original. I didn't see any gold on the entire thing actually. (No more Batman similarities!) I was happy to see that the directional pad was changed so that you have the four arrows—similar to a real computer keyboard. It's not easy to tell in the pictures, but it was nice that there was no lip on the right side when the phone was open. That combined with the wider keyboard made it easier to type on the device. My favorite part about the keyboard was the button for voice commands on the lower left. I have always wanted that on my Droid, so I'm glad to see it on the new one.

From what I have seen of the Droid X and the Ninjablur thing, this device was running the same skin on top of Android 2.1. When I asked about the software, the Verizon representatives told me that it most probably wouldn't be coming with that on it and would probably have Froyo (Android 2.2) plain (without any skin). She said that if it does come out with Android 2.1, it will gt updated very quickly.

The device was running 2.1 and it had 8GB of internal memory as well as an 8GB micro-SD card. The model number says A955 and on the bottom of the device it said "G4DR 4722," but I believe this is just because it is a demo device. The representative did tell me that it had a 1 Ghz processor, but she didnt say what kind.

The representative wouldn't tell me when it will be released, but she said in the next few weeks.