The page confirms three things that we already suspected of the device. Firstly, it has a 4.3” display, most likely with a resolution of 854 x 480. Originally, when you hovered over the phone, you were told that it has a “720p screen”. This has now been changed to say “Captures 720p”, undoubtedly dashing the hopes of many people who saw the original post.

The other feature which has also been confirmed is HDMI output, allowing you to hook the phone up to your TV or monitor to view your media on the big screen. As the Droid X can capture 720p video, it will presumably be able to output 720p over HDMI too, so you can view captured videos straight off of your phone. 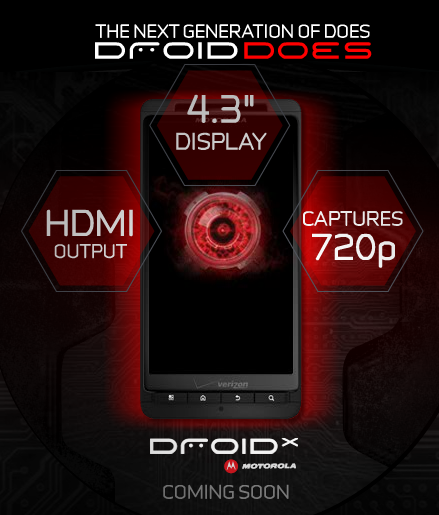 The phone is still set to be officially announced on June 23rd, so if you want to get your hands on the new device, you won’t have to wait much longer!

Adobe Flash (Full Version) Working On The Evo And Other HTC Devices Without Android 2.2

Understatement: T-Mobile Does An Amazing Ninja Act With HSPA+ Rollout