If you’ve been paying attention to the news releases regarding the HTC Aria, you know that AT&T will once again be locking down the apps users can install by restricting unofficial app downloading. If you’ve been paying attention for a while now, you also know that they did the same thing to the Motorola Backflip – the only other Android phone they offer.

Both phones already feature smaller, lower def screens, when compared to their Android brethren available on other networks. They both also have significantly slower processors than most Android phones. What gives?

Now granted, I’m no expert, but that just seems like bad business to me. I can’t understand what they hope to gain by limiting capability.

The only rationale I can think of involves the iPhone, so let me start off by saying, I like the iPhone. I think Apple makes great products – I’m currently rocking my fourth iPod, and I still use iTunes for music. I obviously also like Androids, and I personally prefer Android phones to the iPhone, but I realize they’re different products for different people. Point being – I’m not bashing Apple or the iPhone here, so no fanboy mania arguments, please.

My first guess is that they don’t want to risk making the iPhone look worse by offering it alongside a more open, user-controllable system. The iPhone is the iPhone, and it will always sell like hotcakes, but there’s no reason they wouldn’t want to help motivate sales anyway. iPhone exclusivity cost AT&T quite a bit – of course they want to pimp it as much as they can. They realize that Android is gaining momentum (at Google I/O, they reported that over 100,000 Android devices were being activated daily) and that as a result, consumers may be cross-shopping the two. AT&T wants to encourage customers to pick their crown jewel. 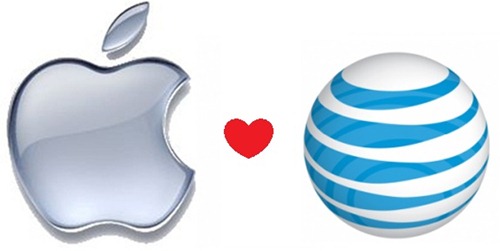 My second guess would be that AT&T actually agrees with Apple’s more locked-down business model and App Store. This also strikes me as illogical, and the only reasoning for that would be that they’re either as anti-freedom as Steve Jobs, or that they’re worried about subscribers sucking down data via unapproved tethering apps. Both of those things strike me as a bit of a stretch.

Regardless, I don’t think any of it makes sense, no matter which way you look at it.

AT&T and Samsung Announce Captivate, Force Me To Eat My Words