Swype, an alternative Android keyboard, that pretty much turned the whole texting industry upside down a couple of months ago when it debuted, is coming to all Android handsets, regardless of the manufacturer, today, June 16th (hey, that's a nice birthday present for me!).

Previously, you could only get your paws on Swype if you acquired one of very few handsets that came with it preinstalled, downloaded it as part of a limited beta, or mooched a leaked version online.

The latter 2 groups felt some sadness yesterday as it marked the last day of the beta period. However, Swype cleared the bad mood right up as it announced a that the new beta version would be available to everyone, without the need for an invitation.

Just head over to http://beta.swype.com starting the morning of June 16th and download away. 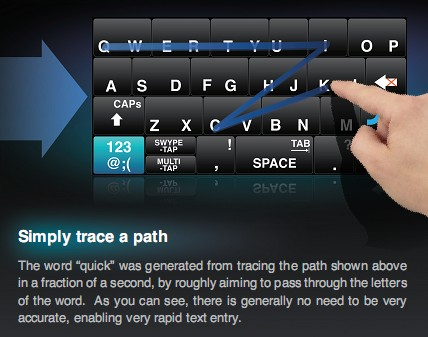 Mike Arrington "coincidentally" just did an interview with Swype's CEO, which you can find below.

And here is the official Swype demo, for those who haven't seen it in action yet: