Galaxy S, a long-awaited Super AMOLED beauty from Samsung, will not be feeling lonely this summer, as Galaxy S Pro - its keyboard bearing sibling - will be joining Sprint's ranks as well.

The phone will have a 5-row spacious physical QWERTY keyboard, which has a refreshing row dedicated to numbers. Compare it to Motorola Droid's keyboard pictured below to see the obvious differences. We approve.

Additionally, as evident from the photos so gracefully flipped and watermarked by AndroidCommunity, Galaxy S Pro will support 4G, finally giving the recently launched EVO 4G someone to hang out with.

AndroidCentral seems to think that this phone will be a Sprint exclusive, although there is absolutely nothing to indicate that - this particular build obviously belongs on a Sprint network, but it doesn't mean other carriers will not also be rolling out a similar model.

I mention this again and again but the Super AMOLED display that I had the pleasure of playing with at Google I/O is truly nothing short of amazing - the iPhone 4 is probably the only device that can compete. By the way, I haven't heard anyone mention this but the Panoramic mode in Galaxy S's camera is a really nice and very easy to use touch - you will not be disappointed.

Unless Samsung messes something up severely, those of you who are keyboard lovers will have a really nice phone to upgrade to. In Sprint's case specifically, the Galaxy S Pro will become a flagship keyboard-sporting product, as the closest handset to it is… the brick-like and outdated Samsung Moment.

And now the pictures, in their full upside-down glory, never mind - I flipped them (seriously, guys, is this some kind of an artistic touch?), followed by a snap of a Galaxy S and a Moto Droid for comparison: 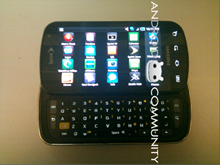 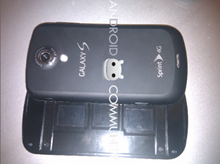 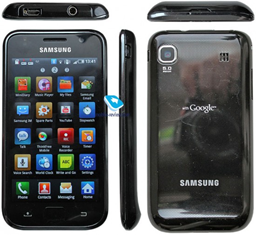 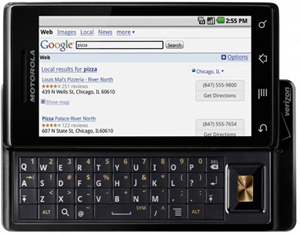