The ROM is faster and more efficient than the stock ROM due to optimizations and bloatware removal (yup, the bloated apps provided by Sprint and some HTC ones are moved to the SD card and disabled!). It also comes with some visual changes.

Android 2.1 Eclair for now but will be updated to 2.2 Froyo as soon as humanly possible.

Of course, if you know Flipz, this is all just the beginning.

Be sure you wipe when you install the first time to avoid problems like boot loops!!

Normally, once you install a custom ROM, you can upgrade to the next version without wiping - you just have to bite the bullet the very first time.

And now, some screens and the features, as per Flipz himself. Most of the changes are not visual, so can't be paraded easily, but you can definitely see an updated launcher. 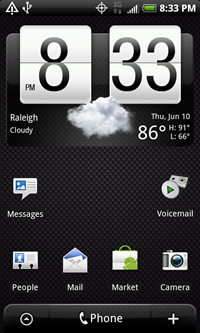 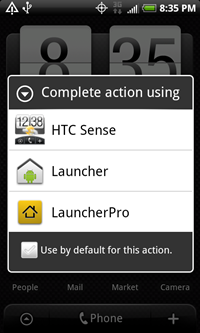 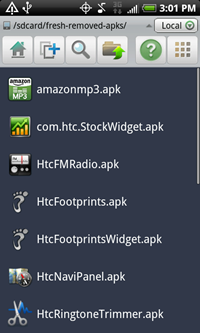 Hi everyone. I’m happy to have my first rom for the Evo ready to download!

A little about me in case you aren’t coming from the CDMA Hero: I have been developing roms for Android since November of last year when I got my first Android phone (the Sprint Hero).

Since then I have released Fresh Rom 0.1a – Fresh Rom 2.1.2, Fresh Kitchen, and worked together with others to port Android 2.1 to the Hero before it was official.

My Fresh series has received over 100,000 (non-unique) downloads total.

I knew as soon as I heard about the Evo that I would be getting one, and I now am happy enough with this rom to release it! It has been tested extensively over the last 24 hours by a group of testers and there are no known outstanding issues.

Keep an eye on http://bugs.geekfor.me for any issues as they come up. Just click on Fresh Evo in the top right corner.

Moved to data and made uninstallable if you want:

Removed (copied to /sdcard/fresh-removed-apks):
The following applications have been removed, however I am trying something new. I have the installer copy all of these applications to /sdcard/fresh-removed-apks. This will allow you to easily install the applications by clicking on them in ES File Explorer, or by copying them to /system/app for the ones that won’t install that way (HTC’s apps don’t play nicely with installing). The applications marked with a * can be installed in one click by clicking on it in ES, the ones marked with # aren’t included because they don’t need to be reinstalled. The rest you will have to copy them to /system/app. This can be done by booting in to recovery and issuing the following commands:

Of course, installing a custom ROM requires root (unrevoked won't work, as it's not true root, at least right now) - this method, courtesy of toastcfh should work.

4g PATCH: http://link.geekfor.me/fresh4gpatch If your 4g isn’t working (and you have 4g in your area!) then flash this patch. It’s only needed by a small handful of people.

A wipe may not be necessary (depending on what rom you are coming from), but it is recommended. You need to be rooted (unrevoked method doesn’t count as root) to flash this. How To: Root Your Sprint Evo. Always make a nandroid backup, I can’t be held responsible if something breaks, etc, etc.

Fresh for the EVO has already been installed by many users and continues to receive excellent feedback.

As always, report back with your own feedback in the comments.