Yesterday, Reddit (one of my most favorite community news sites on the web) launched an updated and completely revamped mobile site, supporting most of the functionality of the main website.

I checked it out in the Dolphin HD browser on my EVO 4G and found very pleasant to use. Here are some features that I saw present and a few comments:

You can access the mobile site via this shortcut: http://i.reddit.com or by appending .compact to any reddit url.

I am probably going to switch to using this updated UI and abandon the "Reddit Is Fun" app, which has long been the only decent and usable Reddit native app on Android. However, it's missing certain features and is frankly quite slow at formatting and sorting data, which kind of spoils the Reddit experience at times.

It's interesting to note that at the end of their blog post, Reddit takes some jabs at Apple, citing dealing with their app store as "pain in the ass". Because of this pain in the ass, a decision was made to stop supporting the iPhone app and instead concentrate on the mobile version instead:

We've decided we are going to open source the existing iReddit app for those who still like to use it, but our development for the future is going to be limited to making our mobile app better. Oh, and since this is a blog post about a mobile interface, and, well, the WWDC was this week, this post wouldn't be complete without:

There's been a lot of discussion about our lack of updates on our iPhone app, and we have a secret to tell you: we really, really hate having to deal with the App store. It's not just that building a mobile app for the iphone requires using tools that are outside of our normal repertoire, or that we had to sign a EULA to use them (that incidentally says we can't criticize them publicly -- oh well), or that by putting energy to support an iphone app we are neglecting android, blackberry, and even palm users (they still exist!) let alone an ipad version.

Mostly, dealing with the app store is a royal pain in the ass. Reddit is a creature of the web and not designed as a desktop app (though they aren't called desktops on smart phones, that's really all that apps are). As such, our development is based around the radical notion that we can deploy bugfixes to site problems in less than a fortnight. This is not the case with the app store (quite the contrary actually). We've had too many legitimate bugfixes rejected from the store because the reviewer of the patch happened to check on a day when someone made a poop joke or our thumbnailer did a particularly good job detecting the raciest image on the page.

Nevermind pointing out that the content for the app comes from the web and that we didn't put the poop joke in there just for them, but all this has been said before and will be said again.
On a related rant, while trying to make our new web interface into a web app by following the docs, we'd just like to say that, regardless of what you might hear to the contrary <meta name="apple-mobile-web-app-capable" content="yes" /> does not work. No portrait mode and no links without closing the app and popping open safari is one hell of a handicap. I can't believe that I had to seriously considered adding a "click" event to every <a> on the page to set "window.location = this.href" to make it work correctly.

Enough ranting though. After three years, Apple seems unwilling to fix this, and yet another rant by some disgruntled web developers isn't going to compete with their making money hand over fist selling apps.

Finally, here are some screens I took: 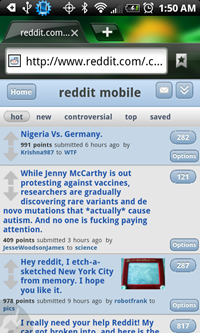 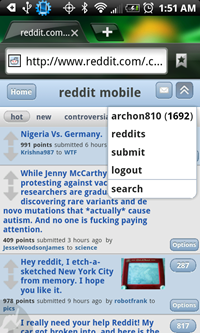 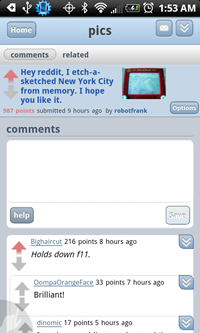 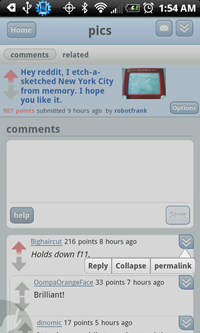 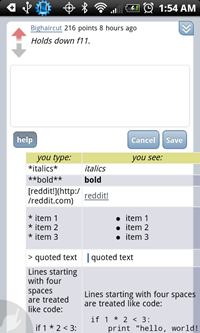 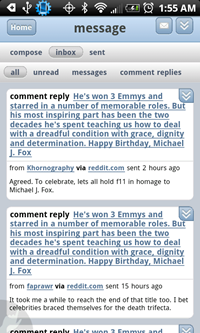