With details of the Motorola Droid 2 starting to find their way into the outside world, we now have photos and specifications of the new device, thanks to Droid Life!

Aesthetically, it doesn’t look like much has changed from the original Droid that we all know and love. The exterior remains mostly the same apart from the slide out keyboard, which is the only part of the device that appears to be significantly different. 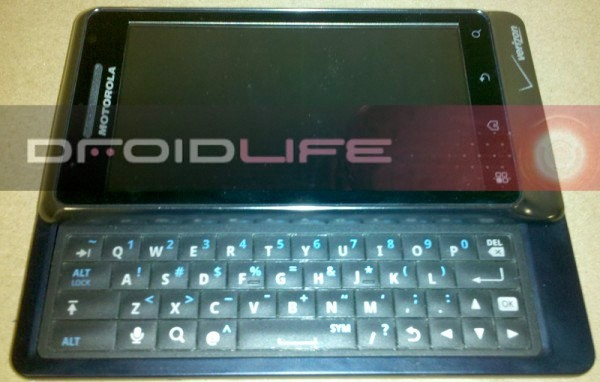 The clunky d-pad from the original Droid is gone, and the flat keyboard has been replaced by a more tactile model. Thanks to the exclusion of the d-pad, the keys look slightly larger and easier to type on than the original model too.

As well as photos of Verizon’s latest and greatest, some specs of the device have also been leaked. It doesn’t appear that major upgrades have been made to the components either with the phone reportedly coming with

Whether the Droid 2 will be marketed as a major upgrade from the original Droid is yet to be seen, but with only minor aesthetic changes made to the phone and internal upgrades that aren’t exactly mind-blowing, it has a lot to live up to! Hopefully, Motoblur won’t ruin the experience of Android which has proved so successful with the original model.

Motorola Launching A 2GHz Android Phone Before The End Of 2010