Prev
Posts in the last
24 Hours
sorted by
Hottest
Next
Update, May 29th, 7PM CST: Qik have updated their company blog and have cleared up the situation. Basically, the core Qik experience, meaning streaming from your EVO 4G to Qik, and the 2-way video chat will be FREE. Apparently, the subscription charge will be for “some advanced premium features” that they are working on. They’ll have an announcement on June 4th with additional details on these features.

The fees just keep on coming. On top of the $10 per month “you own an EVO fee” and the somewhat more reasonable $29.99 per month fee to tether your devices to the EVO, Android Guys are reporting that if you’re looking forward to the face to face video chat feature on the phone, you should expect to shell out an extra $5 a month. 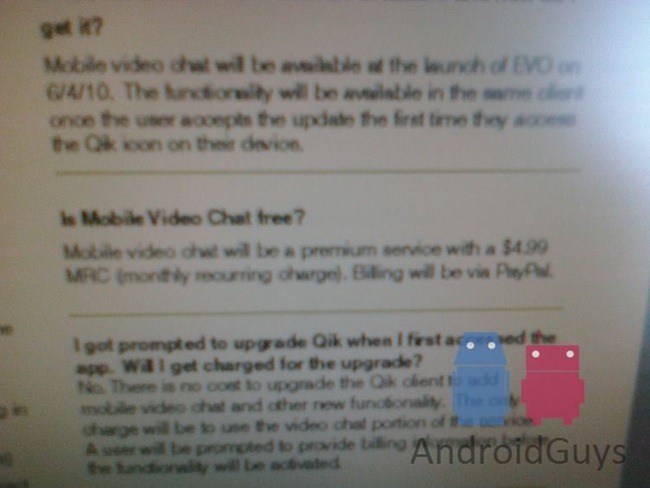 Now, as the title implies, this isn’t 100% confirmed, and may very well turn out to be fake, but Android Guys did post a picture of what they say are Sprint training manuals detailing the charge.

What’s interesting is that they say that the charge will reoccur monthly and be billed via PayPal, which lead Android Guys to speculate that the charge is on Qik’s end rather than Sprints, and we’re inclined to agree.

Many people, including us, aren’t terribly happy with the $10 per month fee, and there are actually websites set up solely to protest the monthly charge. I doubt we’ll see the same kind of backlash for this particular fee, mainly because this one seems to be optional, but it would have been nice for Sprint to have advertised this as a premium feature to begin with rather than give the impression that it will be free. Doomed To Eat Donuts Forever – The Behold II Won’t Be Upgraded Past 1.6