Prev
Posts in the last
24 Hours
sorted by
Hottest
Next
Update 05/26/2010: Well, as legit as the picture that Engadget posted looked, it seems that it was incorrect. I received an email this afternoon from T-Mobile announcing the availability of the Garminfone for $199.99 after a 2 year contract on June 9th. Seems all other details remain the same. You can view more information on the Garminfone here.

Sorry for the punny title – that actually hurt a bit to write. So, it seems that Engadgets received a fairly credible picture announcing that the Garminfone (did they really have to call it the ‘Garminfone’? I keep typing ‘phone’) should be available on June 2nd for the rumored $199 price point – as long as you’re OK with a 2 year contract. 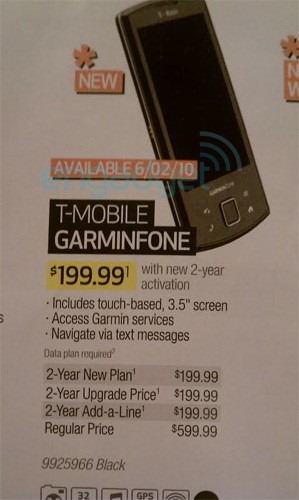 This hasn’t been officially confirmed, so keep that in mind before you take a day off work to pick up the phone. Not that I think many people will be doing that – while the phones fairly interesting, it’s still Android 1.6 and the interface is too bubbly and supersized for my tastes, but hey, the navigation portion is apparently top notch.

Other than the release date, we don’t have any additional information to share, so check out our prior coverage of the phone here.

Droid Incredible Delays Continue Due To Shortage Of AMOLED Displays