Prospective EVO 4G owners: go ahead and shave $29.99 off your expected monthly bill from Sprint. We’re still over a week away from the official launch of the phone, and it seems that it’s already been rooted. The hackers responsible for the root haven’t released many details at the moment, but they did provide us with several pictures and a video of the hack. 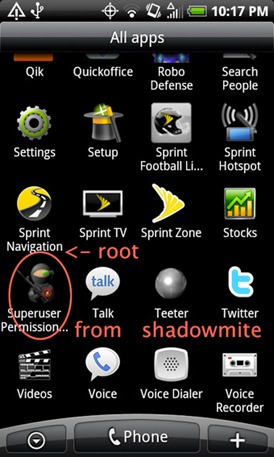 For those unaware (all 3 of you left?), ‘rooting’ a phone is another way of saying that users can now have complete access to a phones operating system (you can see more details here). We’ve covered rooting in the past, and most of the more popular Android phones have been rooted for a while, but the EVO 4G is a bit different.

You see, the EVO has the privilege of being the first Android phone with 4G capability – a fact that Sprint’s not skimping on mentioning (as apparent by the phones name). What this means is that the phone has the ability to access Sprints ‘blazing fast’ 4G network, allowing the phone to download and upload content at near DSL speeds.

For an extra $29.99 a month, Sprint will also allow you to use the EVO 4G as a wifi hostpot for up to 8 of your wireless enabled gadgets. This means that while you’re on the go, you can use the phone to provide 4G network speeds to your iPad or laptop (or both), for example, simply by connecting to the phone over wifi. You have the ability to do this now on Sprint’s network, but you have to buy a separate piece of equipment to do so.

And that brings us to the reason that the EVO 4G being rooted is such a big deal: with a rooted Android device, you currently have the ability to install software that allows you to share your internet connection with other devices over wifi (or USB). So, once the EVO is released, you’ll basically be able to circumvent Sprint’s $29.99 per month charge and share your 4G connection with your devices over wifi – for free.

It’s unclear at this point if Sprint has anything in the works to try and stop this, as they’ve said that the additional $10 month fee that the EVO 4G brings along with it allows you unlimited data on both 4G and 3G, so it’s not like they can cut you off if you’re using a lot of data. Perhaps they’re just hoping that most users aren’t brave enough to root their phones. In any event, I guess we’ll find out soon enough as the phone should be out in a few weeks.

Want A Rooted ROM Based On The Official Sprint HTC Hero Android 2.1 Update? Get The Fresh ROM ...

Rumorama: Anyone Lose A Motorola Shadow?