HTC's Sense UI (user interface) includes plenty of features that could make those with vanilla Android jealous, most of which involve the home screen. Phones running the custom UI have their own set of high quality widgets, which includes a "flip clock" that plenty of Android users seem to clamor over. The widget itself is four icons wide and two icons in height, and includes a clock that flips between numbers, the temperature, and icons to denote the current weather. The Flip Clock widget is so popular that alternatives for those without the Sense UI have begun to make their way into the Market, one of the most popular being Beautiful Widgets by LevelUp Studios, the makers of popular Twitter app Touiteur.

Originally, Beautiful Widgets was nothing more than a clone of HTC's Flip Clock, designed to help those without the Sense UI. However, HTC quickly caught on, and sent a cease-and-desist letter to LevelUp Studio. But instead of just giving up and deleting the app, they decided to make the best out of the situation, and went to work on the app. Now, the app includes a great deal of customization, and allows artists to send in their own skins to be downloaded by users.

The main focus here is, of course, in the clock. While it doesn't actually "flip" (the default skin doesn't include the "numbers-in-boxes" theme of the original), the clock certainly delivers. The large numbers give it that Sense feel, the temperature, date, and your location are all easily readable (in most skins, anyway), and the beautiful 3D weather icons liven up the whole thing. It really works great as the top two rows of your main home screen, something most devices with the Sense UI are advertised with. If your main home screen doesn't have room for it, a smaller clock, four by one icons in size, is also offered as part of the same app. Unfortunately, all the information on the main clock is packed into the smaller one, leading to much smaller numbers and a very crowded feeling. 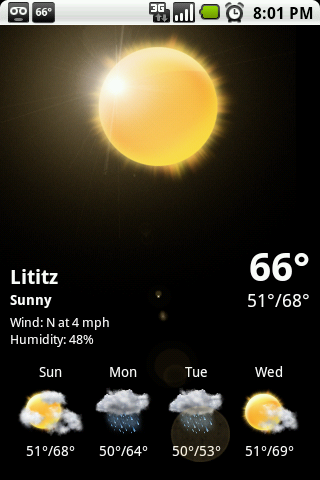 If you don't like the default skin on the clocks, there is a great collection of skins available for free download from within the app. And if you still aren't sold on the clocks, there are still plenty of reasons to grab this app. Beautiful Widgets also takes cues from HTC's Settings widgets, which allow settings like Wi-Fi and Bluetooth to be changed straight from the home screen by simple, one by one icons.

The app includes widgets for all the following settings:

These look great, but my biggest complaint would have to be that they are all separate widgets, and there is no option to have a widget similar to the "Power Control" bar introduced in Android 1.6.

All in all, this app is certainly worth the price (€1.49, approximately $1.90), and with the exception of a few minor flaws, will deliver exactly what you're looking for.

Mystery Verizon Droid Surfaces – Is This The Droid 2?

LG Ally Delayed Until May 27