Update by Artem Russakovskii: You guys are all correct - there should be no gingerbread icon here unless Google actually confirms that this is what is indeed happening.

If a feature will not be available right away, as many of you pointed out, it doesn't mean that it will have to show up all the way in the next major version, especially now that many applications are decoupled from the OS.

I apologize for jumping to drastic conclusions like that - everyone was still light headed from the flurry of announcements that today's keynote was.

You're online. You're browsing your favorite Android website, and you see an awesome app that you want to download. But your phone is charging in the other room.

Currently, you have to go get your phone, go to the Android Market, find the app, download/install, and then you have the app. Today, Google announced that they are changing the game (again). 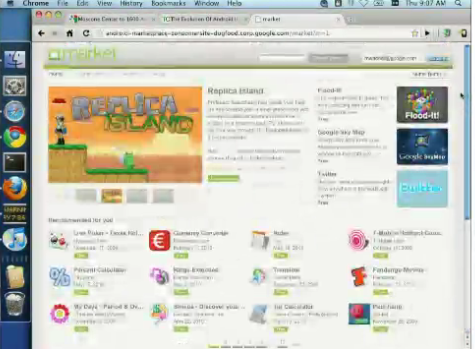 Beyond Froyo: with the new Android Marketplace that will be accessible online from any PC, you can sign in, see all your installed apps on all your Android devices, find the app you just fell madly in love with, and download it directly to your Android phone OTA (over-the-air).

The ability to literally send apps to  your phone is incredible and incredibly easy. But, Google hasn't stopped there. You can send a lot more than just Android apps to your phone.

Beyond Froyo: Today, Google announced that you will also be able to send music to your phone OTA,  via their upcoming Android Marketplace music store (think iTunes in the cloud).  Additionally, their recent acquisition of SimplifyMedia will allow you to...get this...stream your ENTIRE (non-drm'd) home music collection straight through the integrated Android music application on your device.  SD card nearing capacity? Not a problem when you're living in the cloud, baby!

But they go even further.

Froyo: Your friend tweets a link. You open it up on your laptop, but you don't have much time, and you decide it would be much better if you could access the site on your Android phone. Google is making that uber-easy.

Now, you just send the link to your phone OTA, and it opens up immediately, without you ever having touched your phone.

Froyo: Same goes for Google Maps. Pulled up directions to the restaurant for dinner tonight on your PC, but you're running late? Send it to your phone, and you're on your way. Couldn't be much easiser.

In addition to sending data to and from your PCs and Android devices, you will also be able to input information directly into your Android in a new way. 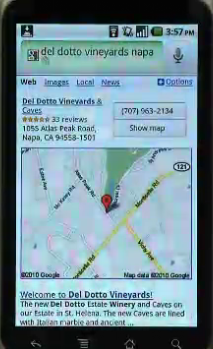 Currently, if you want to Buzz a new photo from your Android phone, you have to open up the camera, take a picture, then pull up the browser, then attach it and, finally, Buzz it. Google is streamlining this process immensely.

Beyond Froyo: Now, browsers will be able to have direct access to your Android's hardware. For instance, Buzz will be to open up the camera, allow you to take a photo, and then you can Buzz it straight from the web app itself.

Streamlining is apparently a key word for Google today, because they also demoed an Android phone taking voice input from a user in order to complete a task.

Beyond Froyo: So, instead of opening up the browser, searching for a restaurant, finding the phone number, and calling it, you can simply tell your phone who to call, and it will do all the intermediary steps for you. Time will be saved. And lots of it.

Unfortunately, as indicated by the Gingerbread Man from Shrek, much of these innovations won't be available until 2011 at the earliest - many blogs are now reporting that Gingerbread has a tentative Q4 2010 date release date, and if that's the case, we'll get these goodies by the end of the year. But, when it gets here, it will be more than worth the wait.

What new capability are you most excited about?