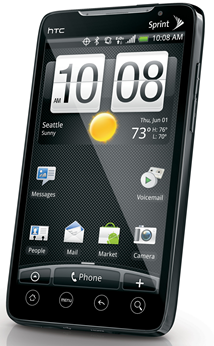 That’s pretty much all the review says. He mentions, in passing, the phone's other features, but avoids going into greater detail about his experiences with them. Instead, since the phone’s biggest claim to fame is the 4G capability, that’s what he focuses on.

While he enjoyed the speedy 4G access the phone provided, he also noted that he didn’t see anywhere near the Sprint’s advertised speeds:

Sprint claims that average users will see downstream data speeds of between 3 and 6 megabits per second on the EVO when 4G is in use. In my tests, in the heart of Baltimore’s popular Inner Harbor district, I averaged 3.4 mbps downstream over 4G, and just under 1 mbps upstream (the upstream speed is capped by Sprint at 1 mbps.) That downstream speed was double the EVO’s speed when using 3G, and the upstream speed was about triple.

In D.C., where the Sprint 4G network is still being completed and tuned, downstream streams varied widely, from under 1 mbps to a high of around 4 mbps.

The EVO was much faster than an iPhone using AT&T’s network, which in Baltimore never got to even 1 mbps downstream and in D.C. averaged about 1.8 mbps. Verizon’s new Droid Incredible, another HTC Android phone, did well in both cities, averaging about 2 mbps downstream, but that was still slower than the EVO.

Sprint explains I never saw anything close to its top claimed speed by pointing out that both cellular reception and test methods can vary greatly, and that my sample was small.

So, while he wasn’t seeing advertised speeds, 3.4 mbps down from a cellular network is still mighty fast.

I really would have liked to see more in-depth coverage of the phone's other features, so I’m really not sure why he chose to overlook those.

Not to start a flame war, but it’s been mentioned in the past that Mossberg leans more towards the Cult of Apple than most, and while I’m not saying that necessarily had anything to do with it, compare his review of the EVO 4G to his review of the iPhone 3GS. Notice anything?

Confirmed: Official Sprint HTC Hero Android 2.1 Update Is Exactly The Same As The Leaked One ...