If you've been trying to get a Google Voice invite, you know how scarce these bad boys are. However, if you are a student with an .edu email address, you are in luck. Though it may not be the most well-timed release (exclusively for students near the end of the school year), this is still a huge plus for them.

To receive the service, all you have to do is sign up here with an e-mail address ending in ".edu", and wait for Google to send the free invitation "within 24 hours."

What is Google Voice?

For those unfamiliar, Google Voice is a service that assigns you a phone number, provided by Google, to control and forward calls made to this number to your own multiple phone numbers. It gives you fine grained control over which calls go to which phones, who gets sent straight to voicemail, and who gets blocked permanently, among other things.

However, the features that Google hopes college students will find most useful will be the ability to make free calls and text messages to any phone in the U.S. and Canada.

Google Voice's speech-to-text feature also allows you to read transcripts of your voicemail, which Google noted as a feature students could use during class. 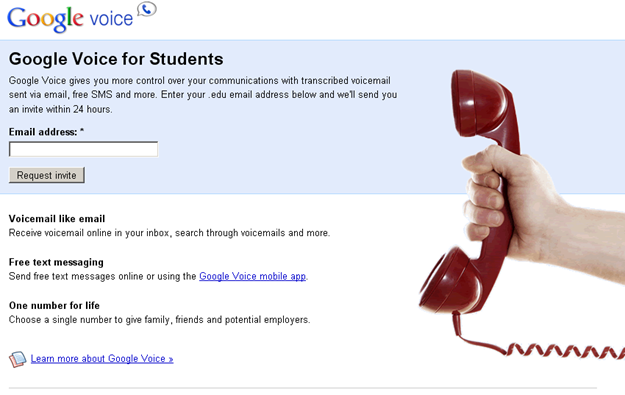 Google Voice has an official Android app (which requires a Voice account to work), so if you are a college student, search for "Google Voice" in the Android Market while you wait for you invitation, or scan the QR code on the bottom of this page.

The Voice app was updated fairly recently, and now features the same, nearly instantaneous inbox synchronization that the official Gmail app does. 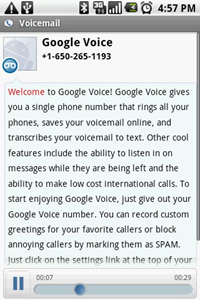 The most interesting feature of the Android app is an ability to route any outgoing calls via Google's servers, so that the people you dial see your Google Voice number rather than your real one.

Since you keep your GV number for life, you can give it out to your contacts without fear of having it ever change. Get a new phone with a new number? Just update your GV account and the GV number will now ring your new phone.

My Best Use For Google Voice

My personal best use for a GV number has been craigslist. Rather than post my cell phone all over the Internet for strangers to see, I post my GV digits. If someone starts to bother me, I just click the Spam button and their calls never get through again (in fact, they'll receive the "This number has been disconnected and is no longer in service" message).

What is your best use for Google Voice? Please share in the comments. 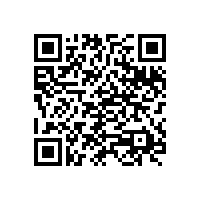