By now, we have all heard the news: Sprint announced yesterday the HTC EVO 4G will be available June 4th. Among a number of touted features, its two-way video chat capabilities are unrivaled.

With two cameras, one on either side of the phone, this device opens up new possibilities. You can take snapshots or video while watching the results in realtime, or you can turn the camera on yourself...without turning the phone around.

The primary camera boasts a whopping 8 megapixels, while the front-facing camera has a slim 1.3 megapixels. That being said, it is still an incredible feature, allowing you to video chat straight from your phone.

In case you missed them before, here are the media capabilities:

All this looks well and good, but just wait a second. "Video chat service available as an upgrade"? Is this in addition to the $10 upcharge people are already up in arms about?

Regardless, Sprint is obviously very excited about this new feature. On the device's promotional page, they claim that the new camera has amazing potential: 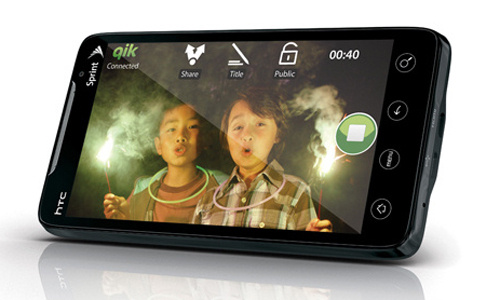 On the social networking side of things, Sprint has apparently teamed up with qik, a multimedia sharing service, where people can record and share live video from their cell phones.

With the ability to video chat and the added benefit of collaborating with qik, Sprint and HTC have made the EVO 4G a mobile video powerhouse.