We are still trying to assemble all the bits and pieces but it looks like Sprint was preparing the 2.1 upgrade for tomorrow, May 14th but uploaded the updater and the new instructions today.

A user of SDX-Developers by the name of chrisfeltdrum was downloading what he thought was an older, previously released in February update, when he realized the OS version he upgraded to was actually Android 2.1.

Chris immediately posted this information to the SDX-Developers forum for confirmation, and in a matter of minutes other users have confirmed the update was indeed official 2.1 and not the old Feburary release.

Did sprint release 2.1?? If so, where's the live wallpapers? 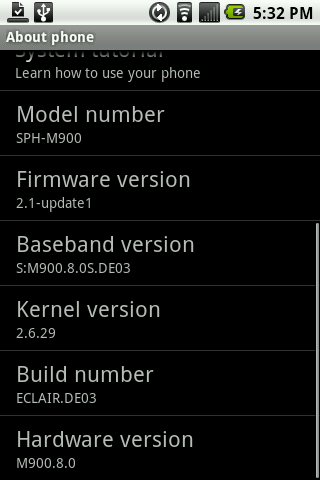 To get your update, which will unfortunately require a full wipe, head over to Sprint's Moment software page and find the Download link at the bottom.

The refreshed update instructions, mentioning May 14th, can also be found on the same page - here is a currently working direct link.

Sprint is unlikely to pull the update, now that it's out, but in case they do, you can head over to the SDX-Developers post where you will find some mirrors.

According to the forum members, an existing root method v7, created in anticipation of the final release, is still working. That's is an awesome job and our hats are off to the devs at SDX-Forum:

We are confident that It is not going to take the crew at SDX-Developers to incorporate this new update into their custom ROMs and release them to the public.

Did you download the update? If so, how did it go and is it everything you've been waiting for?

TechCrunch Spies A Wrapped Froyo Sculpture At The Googleplex. Forget That - Here Is The ...