Since the launch of the Motorola Droid in the fall of 2009, the market share of the Android OS has been steadily on the rise, and it has only been a question of when, not if it would actually overtake the iPhone in sales.

After all, with dozens of Android handsets now flooding the market, how long can the iPhone possibly stay on top?

The answer to when came today, when NPD, a consumer market research group, reported smartphone sales results for Q1 of 2010.

In Q1, Android OS, which rose to a 28% share, finally caught up, spanked, and beat the iPhone (21% share) in phone sales, putting it firmly in the number two slot behind Research In Motion's Blackberry phones, which maintained a pretty strong lead at 36%.

To put Android's growth into perspective, the sales numbers went up 40% relative to the previous quarter numbers (20% -> 28%). 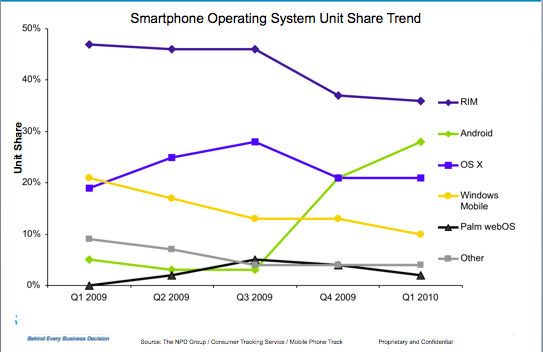 The big question now is: can Android keep the momentum going with the next iPhone release right around the corner?

We certainly think so. If you've played around with the HTC Droid Incredible or heard of the EVO 4G, then you know why.

Sprint Follows Verizon, Snubs The Nexus One In Favor Of The EVO 4G