Today we have a new video from Ryan Stewart, an Adobe evangelist, who shows off his Nexus One running a Froyo build (that's Android 2.2 for those who live in a cave) and Flash 10.1.

In the video, Ryan and his shiny dome show off a handful of examples from fully featured Flash applications to video players playing videos, all relatively smoothly and crashing free (it *is* a pre-recorded demo though, I wonder how it performs in real-life conditions).

The Android Flash player apparently has an ability to use a special video codec optimized for mobile. If it doesn't detect such a mobile video stream, the player shows a message: "this video is not optimized for mobile", which, according to Ryan, doesn't appear to affect playback quality/lag much.

In order to activate Flash specific controls on an embedded Flash application, you will need to perform a single click on any part of the Flash object.

Double clicking will result in a full-screen zoom mode that Ryan calls smart zoom. It seemed to work pretty well during video playback - this way we won't have to look for full-screen buttons specific to each video player provider.

Without any further ado, here is the video:

Rumor has it that Froyo will be released at the Google I/O conference, most likely on its second day - May 20th.

P.S. The last few seconds of the video show off a redesigned home screen menu, which looks pretty sexy. Only 10 more days, everyone! 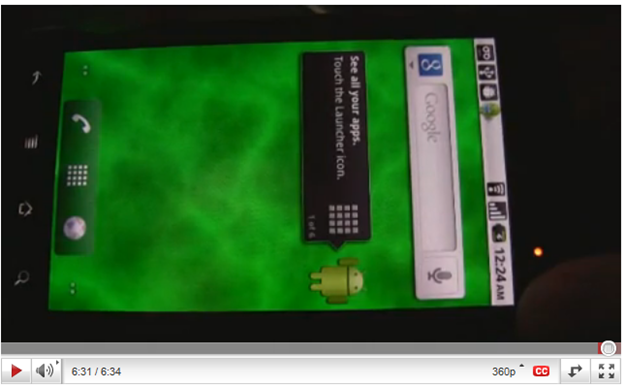 HTC Droid Eris Should Be Getting The Android 2.1 OTA Update Today