T-Mobile seems to be rather keen on marketing the device to families, stating how the "myTouch 3G Slide is designed to help families stay connected to their favorite people throughout their busy days", and citing a June release:

As an HSPA 7.2 capable device, the myTouch 3G Slide can take advantage of faster speeds available on T-Mobile’s network.  With HSPA+, currently available in Philadelphia, New York City, New Jersey, Long Island, and Washington, D.C., customers can experience mobile broadband speeds faster than competitors’ networks. By the end of 2010, T-Mobile expects to expand HSPA+ to more than 100 major markets or 185 million people across the U.S.

The device seems to be concentrated around these three new software features, which have the potential to make the myTouch 3G Slide a great phone. 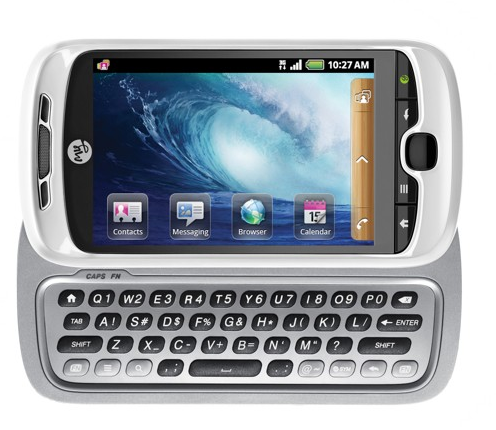 The Faves Gallery allows the user to keep up to 20 ‘favorite people’ in a dedicated application. From here, you can view social networking updates from your favorite contacts and you have the option to email, call or text them too. If someone from your Faves Gallery contacts you or updates their status, it’s added to your notification pane. The idea behind the app is good in principle, although it could get slightly tiresome if you’re constantly being alerted whenever a status is updated.

myModes is a clever way to switch between different themes. You can customize how your phone looks depending on what time it is or where you are. Designed to help ‘draw the line between work and home’, myModes looks like it could be a useful application, although if it uses GPS to track your location, it could quickly drain the battery.

The Genius Button is the button located in the center of the device, which gives you quick access to voice commands. If you want to use voice commands, you simply press the button and talk, without having to tap a designated button in Android. This sounds like it could be a great feature, making it easy to call a contact without having to even look at the screen, or perform other voice orientated functions, although we could do away without a name straight out of Apple's own playbook.

The myTouch 3G Slide is set to be released in June, so potential buyers won’t have long to wait. It will be available in either black, white, or red on T-Mobile.

If you want to check out myTouch 3G Slide in action, you can head over to Engadget who's got their hands on the device and compared it to a variety of other Android phones.

Starcraft 2 Beta Giveaway Contest Results - Get Your Beta On!