The phone will be available for free on various plans starting from £35 a month on a 24 month contract. The most interesting part of this is that consumers can purchase it directly from Vodafone either online or in store, deviating once again from Google’s plan of allowing consumers to mix and match between phones, carriers and tariffs when purchasing a device on their sales website. Instead, Google is simply redirecting UK visitors to Vodafone’s own site to purchase the Nexus One. 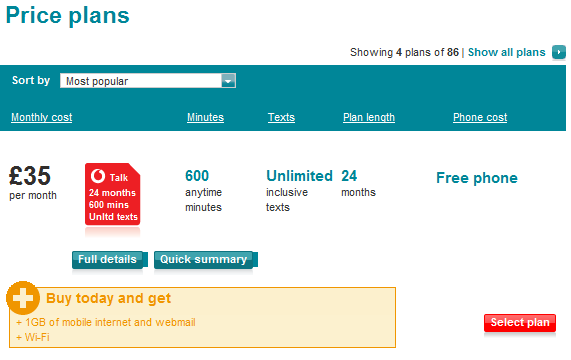 Vodafone are also keen to provide a solid customer service for the phone, ensuring that there is no confusion as to whether customers should contact Google (or at least try) or Vodafone themselves for support. Vodafone have said in the Nexus One FAQ that

Vodafone will support customers. You’ll be able to contact us with queries on tariffs, billing, Vodafone services, network queries and handset questions.

Regarding how the phone will be sold, they continue to say

We’ll be selling it on both Vodafone.co.uk and our retail stores. It will also be available through telesales.

Unfortunately, all tariffs for the phone come with only 1GB monthly data allowance, although that shouldn’t be too much of a problem for most customers unless they plan on tethering the phone for prolonged periods of time. If you want to pre-order the Nexus One in the UK, you can do so now by heading over to Vodafone’s Nexus One site.