Details are being kept internally between team members right now but what we do know is that the CyanogenMod has been ported onto an iPhone 3GS.

Everyone is pretty tight lipped for now but this seems so far to be legitimate, as one of the team members has confirmed the port is working via twitter.

It was only a few days ago when reports surfaced of the Android OS having been ported onto the iPhone 2G which was crazy enough to hear but now the advent of CyanogenMod on the 3GS is almost downright insane.

So far there isn’t any word on how far things have progressed when talking about the functionality of the ROM on the iPhone 3GS, however Nate Tellari (aka @rikupw) has stated that they have the camera and radio working:

People, I cannot disclose any more information outside of the #team ! But for your info: camera and radio work on iphone 3gs!

The tweet above followed an earlier tweet by @rikupw retweeting @ChrisSoyars who was in turn quoting @Cyanogen himself:

For those who don't know, Team Douche is what Cyanogen and a bunch of other Cyanogenmod folks call themselves.

Unfortunately right now this is all we currently know but as more information is released, you can be sure we will be bringing it to you stat. In the meantime, you can monitor the progress on twitter via this search: "iphone 3gs cyanogen".

Update: It Was A Prank

We were afraid of this but the truth is the whole thing was a prank. The following confirms it: 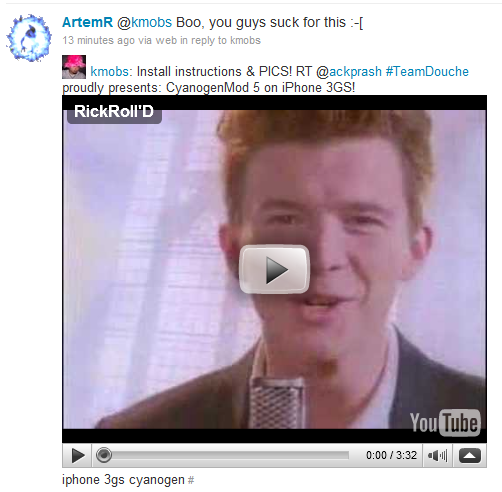 It wasn't April Fools anymore, guys. Not too funny (just a little bit).