Today Android celebrates another milestone - all Android Markets combined count over 50,000 applications and games, according to the Android Market tracker AndroLib. AndroLib is one of the biggest market trackers out there and monitors over 10 separate marketplaces in addition to the main one.

10,000 apps were cranked out in less than a month, as exactly 4 weeks ago we celebrated the 40,000 mark, and, as you can see, the progress has been excellent.

This number is not inflated in any way by counting application updates - AndroLib includes only separate programs in the total.

AndroLib is often accused of having higher numbers than other sites. When reached for a comment, Etienne from the AndroLib team had this to say to us:

It is rarely mentioned but Androlib covers over 10 markets and therefore also lists applications unfound in other sites. Just try to find this random russian app on the other sites :-)

Honestly, we cannot guarantee we have everything but we think we are doing a pretty good job at it. Our number is high as some applications might have been taken out of the market. We count everything that has ever been added to the market. Upates do not count towards the overall number obviously.

On the rating front, nothing is added manually. All the ratings are the phone ratings.

A useful statistics page contains a whole variety of graphs for the curious.

As I estimated earlier, at the pace the Marketplace is growing, it should reach 100,000 applications by sometime in September.

Combine this with the upbeat release of private beta testing results of porting Flash/Air to Android, and you got yourself the perfect storm for Android expansion.

Of course, the application situation is far from perfect, but the Apple store can't say it is doing a much better job of controlling all the "spam apps".

Nevertheless, congratulations to Android and Google on this another awesome milestone! 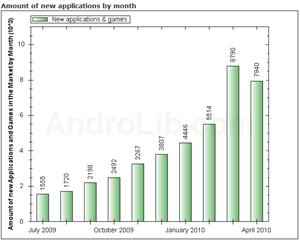 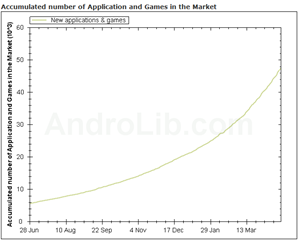 Many Secrets Still Buried In The Nexus One To Be Discovered Later. Secret One Unlocked: Nexus ...