Finally, a decent Android skin that isn’t HTC’s Sense UI. Along with a few details about Dell’s newest superphones, we’ve been treated with plenty of information about their custom Android skin, dubbed Stage UI.

It seems that, initially at least, this new UI will be exclusive to Dell’s newly leaked trio of high-end Android phones, the Thunder, the Flash, and the Smoke. At this point there’s a bit of confusion as to which version of Android the Stage UI will be based on, with Engadget reporting that the Thunder will run Flash and Android 2.1 and the other two phones set to run Froyo. I really can’t imagine Dell developing Stage UI on 2.1 just for the Thunder, and since rumor has it that Flash will only run on Froyo that means it would have to be backported, so my money says that all three phones will be packing the updated OS. 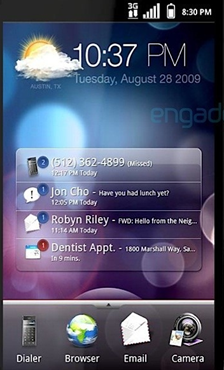 In addition to the ability to run Flash, it looks like Stage UI will include a standalone Hulu application, similar to the existing YouTube application. No word on who exactly developed the Hulu application, and if it will be available for phones outside of the Stage ecosystem or even on phones other than the Thunder, so fingers crossed that it will hit the market at some point. You can also expect to see deep integration with Facebook and Twitter that give the Stage UI a vaguely MotoBlur-esque emphasis on social interaction and sharing.

All in all things are shaping up quite nicely for this newly birthed Android UI and I’m eager to get my hands on it in some form or another. If the renders are at all accurate, Dell has definitely put some thought into this, and, in my opinion, it’s giving HTC’s Espresso Sense UI update a heavy beat down.

I’ve cropped out the juicier bits of UI I could find and linked the images below. Some are fairly low res, but we’ll take what we can get at this point.

Break Out Those Drool Buckets: Dell Brings The Thunder

iPhone Now Runs Android Too. Wait. WHAT? Is "Flash Coming To iPhone" Going To Be Our Next ...