In this tutorial, I will guide you through the easiest and most reliable way to fully and 100% back up and restore your Android phone.

By fully back up, I don't mean backing up just your address book or your emails, or your dog. I mean EVERYTHING that resides on your phone with the exception of the SD card - what we will create is essentially a full image of your phone's current state that you can restore to at any time as if nothing happened. This image will be written to your SD card which you are then free to copy around and back up on your computer.

In fact, the backup described here is very similar to imaging your computer hard drive before you swap drives - the principle is the same.

Here are some benefits of being able to perform full backups:

Here are some things to keep in mind, however.

Things To Keep In Mind

Here is what we will be using. The list may seem overwhelming at first, but don't fret - every step is really quite simple.

You will need anywhere from 10 minutes to an hour to finish your first backup, depending on your skills.

So here we go. Ready for the big list?

Aaaand we're done. That wasn't so bad, was it?

The above steps and the backup/restore themselves are explained in more detail below.

Rooting is a process of getting full access to all of your phone's functions. Think of it as unlocking your phone and enabling it to do anything it wants (except for flying - let's not try that one).

We have a full explanation of the most important benefits that come with rooting your Android phone right here.

You will need root in order to do the full backup as an unrooted phone simply will not grant any application enough access to do it.

Because rooting each phone is different, the easiest way to figure out the right way for your model and Android version would be to just Google "YOUR-PHONE YOUR-ANDROID-VERSION root".

Nandroid is an application capable of making complete snapshots of your whole phone as well as restoring from those snapshots.

There are different ways of getting Nandroid onto your phone and here we will use the simplest of all approaches - using the ClockworkMod ROM Manager application which also comes with a whole bunch of other useful stuff. It can only be used on rooted phones, which is why step 1 was necessary.

This is the easiest part. Hrm, come to think of it, everything described here is pretty easy but installing an application from the Android Market - what can be easier?

And now you're done with step 2. Did I mention this was the last step?

Back Up Your Phone

Now we can do the actual backup.

The backup itself will take about 5-10 minutes and will produce a new timestamped directory on the SD card. This directory will contain all of the files needed for restoration - they comprise your full backup.

Here, I'll give you a preview of what a full backup looks like:

Now, before we can back up, we need to install a Recovery Image specific to your phone. Don't worry - ROM Manager does it for you automatically with only a press of a button.

Important: unplug the USB cable during this step, as some users are reporting problems flashing recovery while plugged in (thanks DennGir and others).

This recovery image contains a boot loader which replaces your original boot loader. The boot loader gives you the ability to run Nandroid backup and restore commands outside of the OS. It also lets you install ROMs but we will not do that today. Since the OS cannot back itself up fully while running, ROM Manager will reboot into this boot loader to perform Nandroid operations.

Recovery images vary from one phone model to another, and ROM Manager automatically figures out which one you need. These recovery images are not created by one person - there is a large community effort behind them, and the ROM Manager simply brings together in one convenient package. Alright, enough ranting - let's get to it.

Warning: flashing a recovery image most likely voids your warranty

The one-time setup is complete. 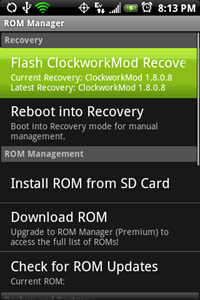 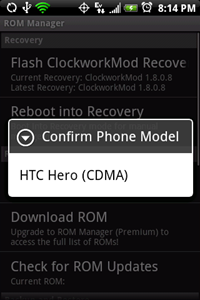 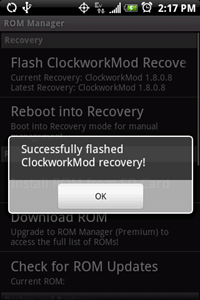 There is a chance that you are using a phone unsupported by the ROM Manager. If this is the case, this backup solution will not work for you, at least not until the app starts supporting your phone.

ROM Manager's creator Koushik Dutta is quite active in the community and will hopefully include support for new phones as they get released.

Just for reference, as of 4/15/2010 the following phones are supported:

This list is included here for reference only and is subject to change. If you don't see your device here, check with Koushik's site for the latest supported list.

If you have successfully installed a recovery image, you're ready to start your first backup. 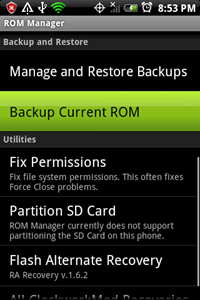 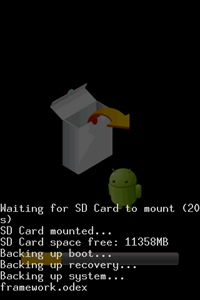 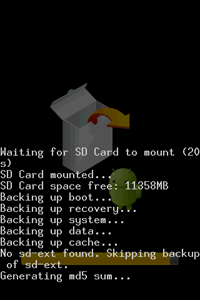 After the backup is complete, your phone should boot back up normally. You're done!

The backup is located on your SD card in the clockworkmod/backup/SOMEDATETIME directory. Here is a screenshot of what it contains again:

Feel free to copy these files elsewhere and store them safely.

You may want to restore the original full backup of your OS that you took in the Back Up step above. Maybe you forgot something in the original installation or want to go back to stock to apply an update your carrier finally published - no problem.

After you’re done restoring, you’ll be back to your original OS as if nothing ever happened (was it just a dream?)

Restoring is just about as easy as backing up: 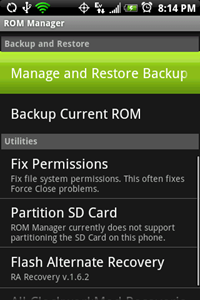 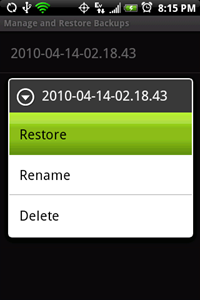 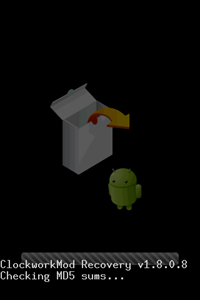 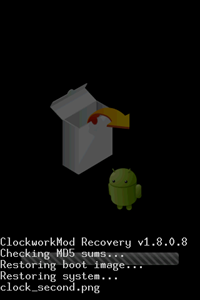 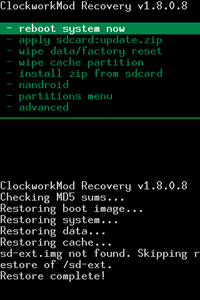 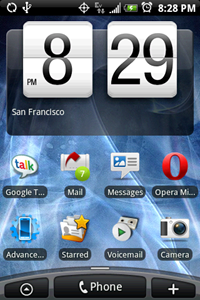 Look - the phone boots and the resurrection went just fine!

I sincerely hope that this guide was clear and helpful. Of course, if you have any questions or corrections, feel free to share them in the comments.

Support Koushik, the ROM Manager creator, by purchasing the Premium version which comes with a few added benefits that automate installing and updating custom ROMs.

In conclusion, I'm going to leave you with the screenshots of some other ROM Manager menus as well as the Recovery console: 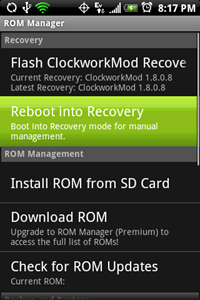 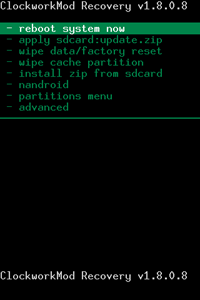 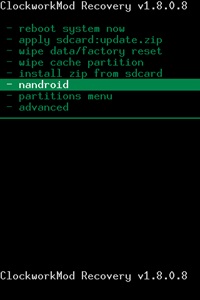 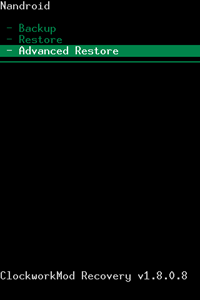 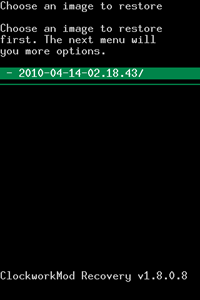 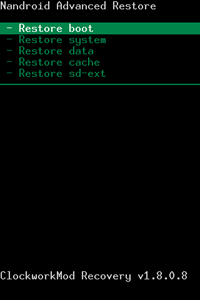