Last week, after the announcement of HTC EVO 4G at the CTIA conference, Sprint quickly dropped a bunch of developer documentation onto their Android dev site. Having dugg in a little deeper, we saw confirmation from the horse's mouth itself (Sprint) that the EVO 4G will be running on Froyo - the version of Android following Eclair (2.1).

Here is the relevant part of the developer document v0.10 (also unchanged in v0.11): 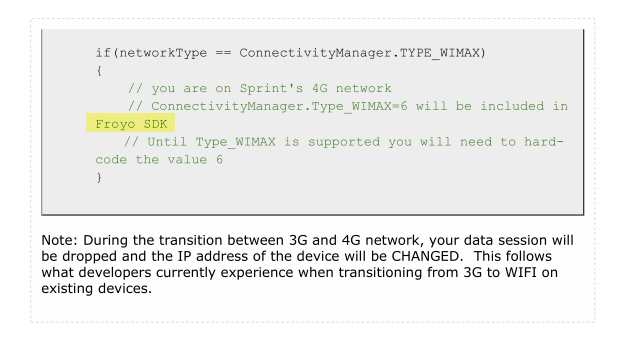 According to the above, TYPE_WIMAX - a constant used for dealing with WiMax connectivity features - should be added in the Froyo SDK. While developers can use a temporary workaround (the value 6) to trick their apps into thinking WiMax is supported and carry on developing, actual SDK support for it will not be coming until Froyo is released.

Since EVO 4G is rumored to come out sometime in June, expect Froyo to be announced at any point between now and then.

Froyo is rumored to slim down the OS by putting it on a strict diet and shaving off the majority of currently integrated applications to be released separately. Not many other details are known at the time.

Don't Wait For Verizon To Update Your Droid To 2.1 - Do It Yourself And Do It Now