Today I put on my wizard Darth Vader math hat and decided to figure out when the Android market is going to finally reach the 100,000 mark.

Well, it seemed like a nice round number, and it also happens to be the same number a small company called Apple was obsessing over in November 2009:

CUPERTINO, California—November 4, 2009—Apple® today announced that developers have created over 100,000 apps for the revolutionary App Store, the largest applications store in the world.

Let's take a look at Android.

On March 16, 2010, the number of apps allegedly reached 30,000. I am going to go by something more tangible - AndroLib, a well-known web tracker for Android apps. Sure, maybe there are some inconsistencies and perhaps a small number of apps is not available through the market on the phone but the beauty of Android is that if you want, you can still install them. Using any source you want.

According to AndroLib, there are currently 39,614 apps on the market.

AndroLib provides a nice chart of the number of applications added each month. We can see steady growth month-over-month: 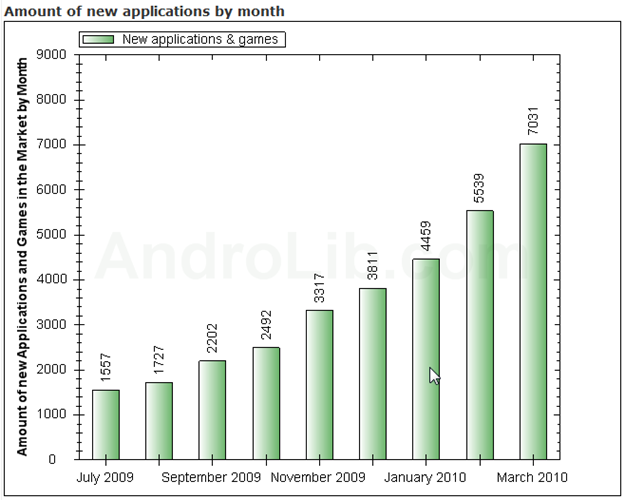 I used this data to come up with an extrapolated projection of when the total number will be hitting 100,000.

Here is the chart, based on the data points from AndroLib: 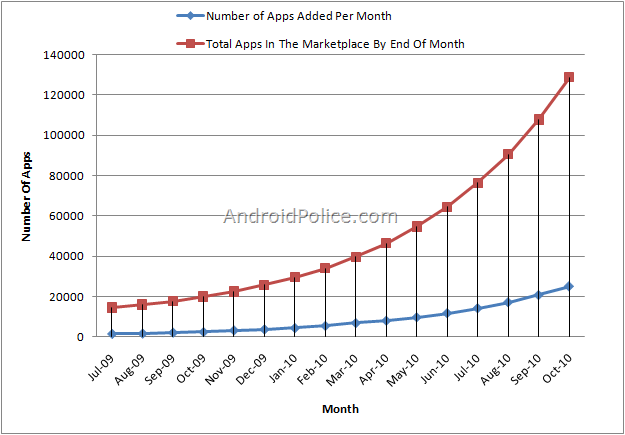 It looks like at the current pace the Android Marketplace will be hitting 100k apps right around mid-September 2010.

The Android Marketplace launched sometime in November 2008 (with only 10-13 apps, :-/, and paid app support launched a few months after that). This means it will have taken Android around 670 days or about 22 months to reach 100k apps, compared to Apple's 16 months. And since Apple started their store 4 months before Android did, they will be the overall winner to 100k by about 10 months.

This result is not entirely unexpected given iPhone's popularity and the appeal of the iPhone market in an era when nothing comparable existed.

The fact that Android came out during the time when developers were going gaga over the App Store and still became successful is vastly impressive.

With 100k apps around the corner and a few dozen phones, some way more powerful than the iPhone, the Android army is putting a firm grip around Apple's neck. I am willing to bet that by the end of 2010 Android handsets will outnumber iPhones, and Apple will be simply unable to keep up.

We will not even need a single iPhone killer, although such phones as the HTC EVO 4G and the Samsung Galaxy S will give the iPhone a run for its money.

But for now get ready to welcome 60,000 more new applications by September (please don't let them all be fart machines and sound docks)!

HTC Continues With Its Plans For World Domination, Announces A Super Easy And Polished American ...