The mobile sphere is abuzz with the rumors of a possible HTC Supersonic announcement tomorrow, all caused by a tiny note Sprint posted in the member area on Sprint.com. Here is a screenshot (courtesy of Sprint Forums):

According to other users who have talked to various Sprint customer service reps, Supersonic is indeed "coming very very soon", which seems to only confirm the rumor. Of course, nothing is 100% until we tune into the announcement… the time of which is currently unknown.

It is also not clear what exactly "tomorrow" means here, mostly because Dan Hesse, the CEO of Sprint, is scheduled as the keynote speaker for the 2nd day of the 2010 CTIA Wireless conference in Las Vegas, which happens to be Wednesday, not Tuesday as some are mistakenly reporting. It is likely that his keynote and the Supersonic announcement will be one and the same. It isn't exactly a surprise, however - the web was full of leaked stories only a few days ago.

HTC Supersonic sports a snappy 1GHz Snapdragon processor (oh, hey, thaaat's why they called it that way), a ginormous 4.3" screen (the upcoming HTC HD2 has the same size and is mindblowingly beautiful), Android 2.1 with Sense, and last but not least WiMax (4G). Together with the Nexus One, also announced for Sprint the same day, these 2 Snapdragon beasts are widely anticipated by the Sprint crowd.

Here is another image of a chat with a Sprint CSR suggesting that the Supersonic launch will be "very soon": 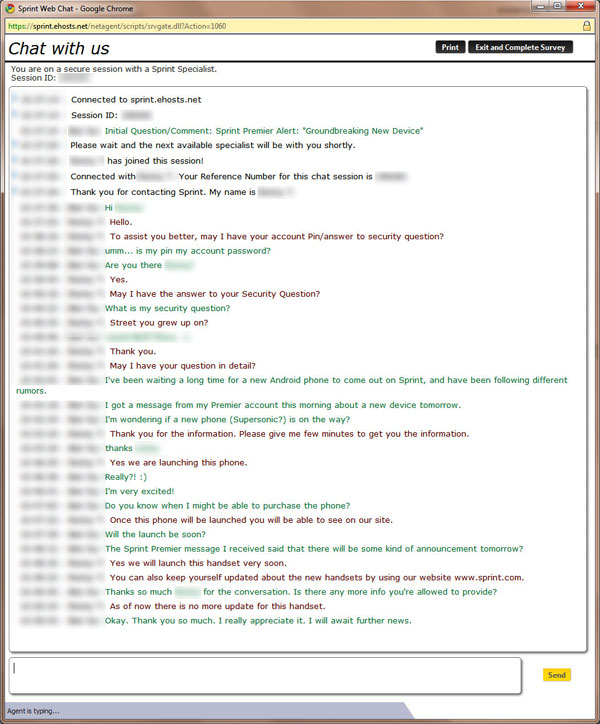 How I Doubled My Android Phone's (HTC Hero) Battery Life or Just How Much Email Polling Affects ...