Fresh off the press, i.e. the first day of the CTIA Wireless 2010 trade show, Kyocera announced its return into the smartphone business with, as you already guessed, a new Android device - the Zio M6000.

Here are the specs at a glance:

No word on the CPU type and frequency, included memory card size, supported carriers (though it was clarified to be CDMA. Verizon? Sprint?), or the initial Android version.

Does this look like a phone that is going to turn some heads? Perhaps. Will anyone actually care to buy it? I doubt it, considering the market is about to be flooded with far superior devices. Kyocera seems late in the game but I suppose it's too early to issue a definitive verdict.

And while we're at it, does the M6000 remind anyone of the Nokia style? Sure brings back the memories I'm trying to suppress. 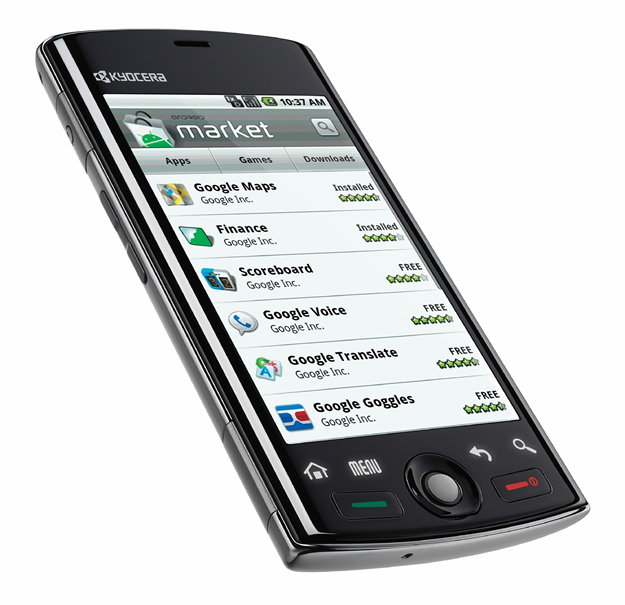 LAS VEGAS, Mar 23, 2010 (BUSINESS WIRE) -- Kyocera Communications Inc., provider of Kyocera- and Sanyo-branded wireless devices, today added a human touch to the high-tech smartphone market with the introduction of the Kyocera Zio(TM) M6000 Android(TM) smartphone at the CTIA Wireless 2010 trade show. Zio blends an elegant design with an ultra-intuitive user interface to unlock the vast array of content and applications in Android Market(TM). Zio, which marks Kyocera's return to the smartphone space it helped to create nearly a decade ago with the release of two Palm-based smartphones, will launch in Q2.

Zio (pronounced Zi -O) uses CDMA2000 1xEV-DO rev. A and Wi-Fi network technologies and features an impressive, high-resolution 3.5-inch WVGA motion-enhanced, touch-screen display as a backdrop for a fully customizable mobile multimedia experience. Along with the touch-screen, an intuitive, effortless trackball helps users navigate features such as the 3.2 MP camera with 30fps video record/playback, media player, full HTML web browser, Google Maps(TM) and countless widgets and applications such as Facebook, Twitter, Open Table and more available in Android Market. Zio offers substantial user-available internal memory (256MB) and supports an additional 32GB through its microSD memory slot. And, no smartphone would be complete without an ambient light sensor and accelerometer for easy viewing virtually any way, anywhere.

"Returning to the smartphone space with a compelling Android-based device makes Zio a milestone product for Kyocera," said Eric Anderson, vice president of sales at Kyocera Communications Inc. "We've received great feedback about this phone from our customers and we're confident that consumers will embrace it just as warmly."

The phone's other key features include a virtual QWERTY keypad, advanced voice dialing, a superior speakerphone, stereo Bluetooth(R) and 3.5mm stereo headset jack, USB 2.0, and a dedicated camera key to have fun with apps such as PhotoVault and Google Goggles(TM). The handset measures in at 116 x 58.6 x 12.2 mm and has a talk time of up to 6 hours and standby of up to 18 days. Zio supports AAC, AAC+, eAAC and MP3 audio formats; H263, H264 and MPEG4 video formats; and BMP, GIF, JPEG, PNG, and SVG-Tiny image formats.

"Zio stands apart among Android devices because we intentionally set out to humanize this advanced technology and make it accessible and approachable for any consumer -- without sacrificing functionality or style," said Tom Maguire, head of global marketing at Kyocera Communications Inc. "We're confident that Zio is the ideal platform to bring the power and customization of Android to an entirely new audience."

Sprint Goes After AT&T And Apple In A Snarky 4G Sprint Overdrive Mobile Hotspot Vs iPhone ...